In 1759, after the fall of Fort Niagara, Major-General the Chevalier de Levis was sent to the upper Saint Lawrence to put the defenses there in order in case the British moved on Montreal.

Lévis decided that the island of Oracononton, a strategically located island three miles below La Presentation, was the best place for a fort. Lévis changed its name to Isle Royal. Fort construction progressed throughout the winter of 1759-1760. Governor-General of New France, named the new post Fort Lévis.  In the spring of 1760 Captain Pierre Pouchot of the Regiment de Bearn was put in charge of the defense of Fort Levis.

Fort Lévis was an irregular hexagon shape with a perimeter of 650 feet. It occupied about half of Isle Royal. It has a water-filled ditch 30 feet wide that surrounded the fort’s 11 feet high and eighteen-foot wide wood-faced parapet. Built upon it was a second wooden parapet seven feet high and 9 feet wide. Both were filled with stone and earth. A platform of timbers was built just inside the first parapet, near the top. Here the cannons were placed.  Around the island, there was a bank of four feet in thickness. It was made of earth and stone, with an abattis of branches placed outside in the water.  At the lowest point of the island was a redoubt of timbers pierced for five cannon. The barracks, magazines, soldiers' quarters, and other structures in the fort were finished of wood, piece upon piece, and covered with planks. A palisade of pointed stakes surrounded the fort, placed in the parapet and ditch.  Large numbers of fascins or bundles of sticks bound together added further protection to the fortifications.

Fort Lévis presented a formidable image for any invading army.  The reality was its protection was made of wood and its defenders lacked supplies, cannons, and manpower. 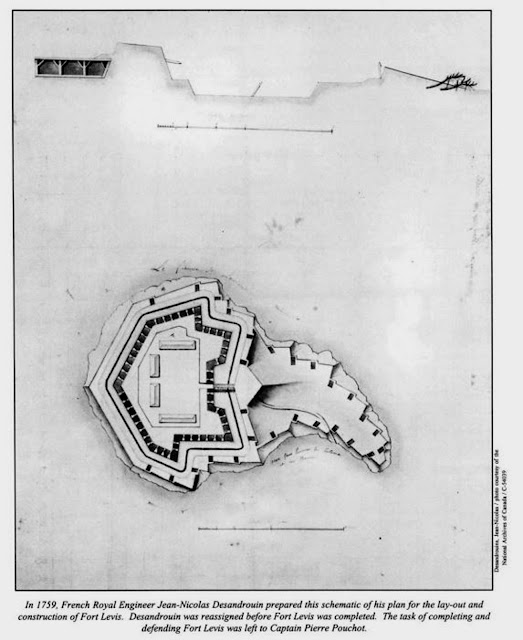 This web site dedicated to the memory of Fort William Augustus military post on Chimney Island. A project of the St. Lawrence River Historical Foundation Inc.


Material displayed on or downloaded from this website may not be reproduced or used in any manner whatsoever without the express written permission of St. Lawrence River Historical Foundation Inc.